*(copy/pasta from the tumblr~)*

★ ! HAPPY BIRTHDAY, RYU ! ★
Yup ! Today’s our local flashy mascot boy special day and I succeed (almost) not to screw up the time ! *thinking of all the other chracters’ B-Day that I missed…*
He’s currently having fun with Aya and the gang, whoohoo ! 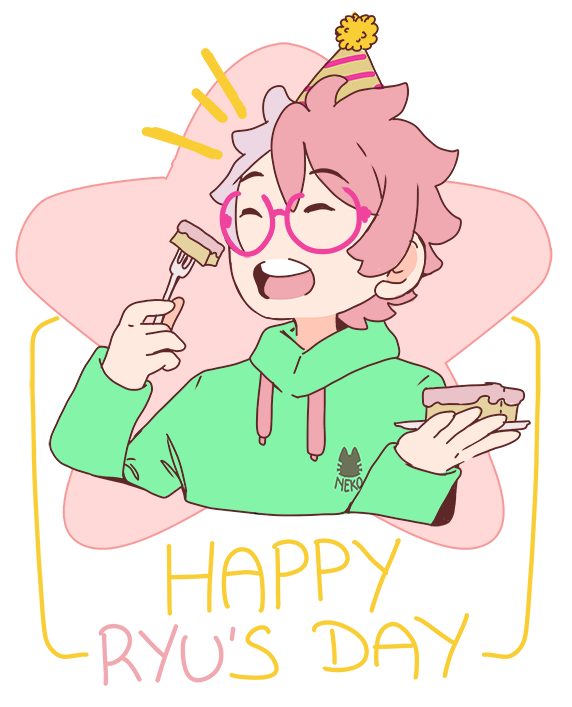 Oh but the party isn’t done yet, because… TADAAAAAH !
Today’s also the day of the very first Fujiwara’s Event with a contest !
YES YES ! LET’S BE HYPED FOR A…

*[Contest is in english only]*

Ghosts, witches, vampires and whatnot, Halloween is a great source of inspiration for a number of strange stories and folklore. So tell me… How about we held a contest during this spooky yet intriguing period ? Yes, yes ! You heard right ! Today is the day of the very first Fujiwara Contest, woohoo ! *clap clap clap* And who’s better than our dear Kenji and Ryu to be the actors of this event ? I know at least one of these boys will be extactic to be part of it !

-THEME- ★ A spooky soirée at the school event ★

°GENERAL RULES -The contest will be split into two parts : part 1 will be the drawing contest, then right after will start the writing contest. -The entries should be safe for work/all age, and shouldn’t spoil the characters and their backstories (meaning, it has to be set before anything is revealed about the characters in the original Fujiwara’s project). -You can’t participate in both contests, you’ll have to choose between one or another. -The drawing and writer winners work will be united by me some times after the dealine, to make it into a mini playable story and be released for Halloween on itchio ~

°WHAT TO DO : In this contest, the participants will have to draw a Halloween costume for Aya. You can also draw one costume for Kenji and/or Ryu, but it’s not an obligation as long as at least Aya has a costume (only one costume for each character will be accepted, if you decide to draw for the two or three of them). The amount of costumes you will draw will not influence the final decision.

°RULES : You are free to draw pretty much whatever costume you want, design-wise. Detailed costumes are allowed, but they have to be originals (no fanarts or OCs costumes from other people will be accepted) and not too gory.

°WHAT TO DO : “The Fujiwara’s school is holding an event for Halloween and Aya decides  to go and enjoy the event, as Minami and Ichigo suggested her. How will she spend her soirée ? Fun, romance, fright or maybe all the above, it’s up to you to decide how her evening will be spent ~” In this contest, you’ll have to write a little story about Aya spenfing a few hours at the school Halloween event.

°RULES : You are free to write anything about how Aya is spending her evening at the event, as long as it is safe for work/all age
- Should not exceed 2K words
- Aya has to be the main character
- Only Aya and/or Kenji and Ryu should physically appear in the story. Other chracters might be mentioned, but they should not make an actual appearance during the scenes
- You must write as if the event takes place before any major reveal in the actual Fujiwara’s project, as to not spoil people who might not have played the game yet
- You must check on the winner’s costume as reference to be accurate in your writing, if you decide to describe them at some point
- Only one entry by participants
- Please note that the only backgrounds used in the story will only be the school’s corridor, the school gymnasium, the school entrance and/or the Occult Club’s room

- Object of the mail : Fujiwara Halloween contest 2020
Then fill your mail like the sample below :

[The contest you’re participating in]
[Your preferred nickname or name for you to be credited]
[Your social media if you want it to be promoted] [Attaching your entry in a text document or .pdf for your writing, and .png or .pdf for your drawing]
————————
The names of the winners will be announced October 17 and the playable story will be released on October 30. I wish you all good luck and can’t wait to see your entries ~